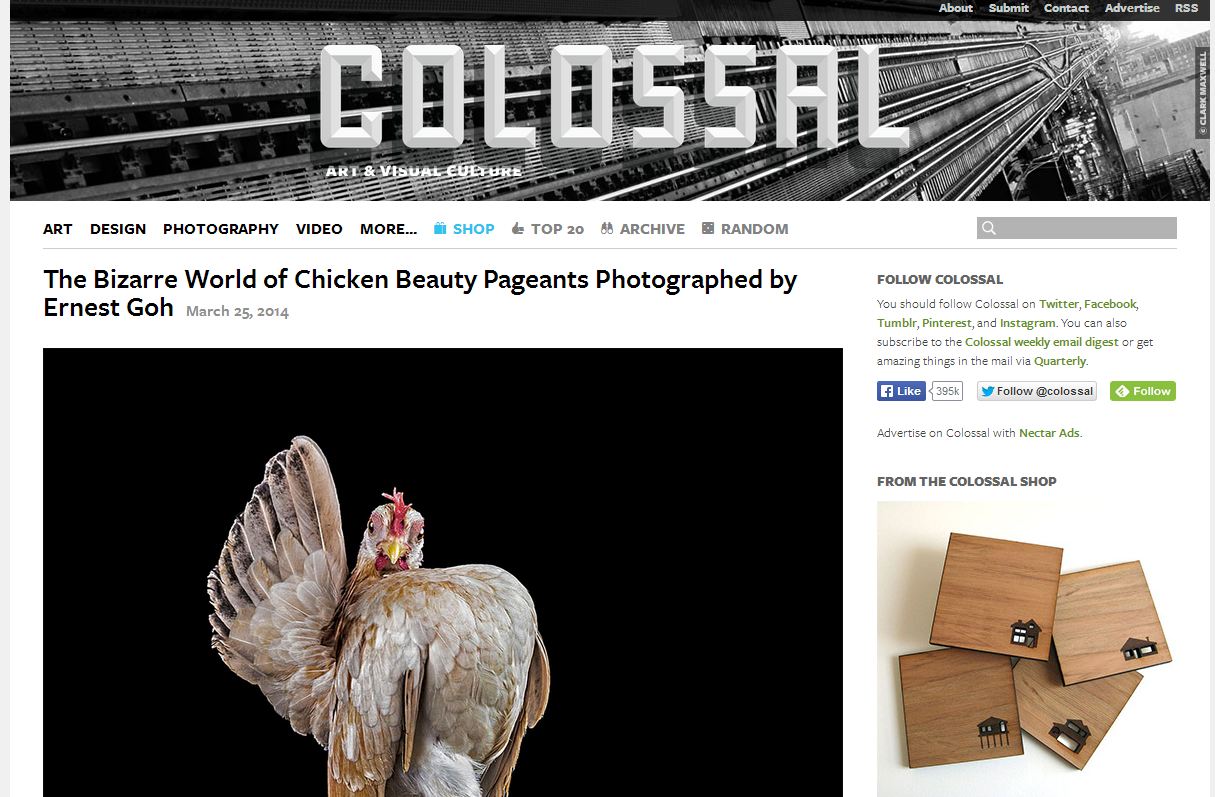 Photographer and visual artist Ernest Goh is known for his work photographing wildlife and other animals. His latest book documents the strange world of chicken beauty pageants in Malaysia where he encountered a breed of bird called the Ayam Seramas, an ornate chicken raised not for its meat but purely for its appearance. These chickens not only have decorative plumage but possess the ability to strike ridiculous poses. You might think these photos are somehow manipulated (or worse, the animals forced into these positions) but a behind-the-scenes video by Goh shows the chicken’s ability to strut just as depicted. The book, titled Cocks: The Chicken Book, is available now through his website. All photos courtesy the artist. (via Peta Pixel)

The title alone is sure to double our readership over night !!!!!!

These stunning images are suitable for work though and come from a book entitled Cocks: The Chicken Book. I think the chicken book part was added purely to avoid any confusion. Getting serious for a moment though Singapore Photographer Ernest Goh has been photographing Chicken Beauty Pageants. This is the newest project for Goh who is widely acclaimed for his previous photographs of animals, most famously his series on fish.

This series of images follows the Ayam Seramas bred of chicken as it is known for its incredible beauty within the chicken circles. In the book he follows the journey from egg hatching all the way through to pageants. The photos really show the characteristics and personalities of the birds in a serious but also humorous way. We think they are absolutely brilliant. Goh has a shop via his website where you can purchase prints and books.

Some of Gohs other works include Altered Land, a documentation of the aftermath and recovery of Aceh, Indonesia after the 2004 South-Asian Tsunami; Beyond Mask, a book documenting the situation inside Singapore’s largest hospital at the height of the SARS outbreak in Asia. He is also the creative director of The Animal Book Co; an outfit that works with animal welfare groups through photography.

You can check out his website and more of his work by clucking …. I mean clicking ….. here.